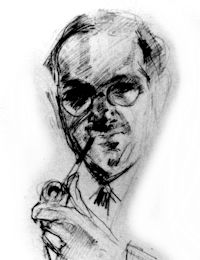 "He is best known... as the poet-painter of winter, for he liked to paint scenes along the Des Plaines River when the snow was falling and mingled with his colors." Characteristic of the Krehbiel landscapes is the feeling of peace and solitude imparted by his subtle blending of pastel shades in depicting the play of lights and shadows among the trees and in the icy rivers he loved to paint on location in even the worst of winter's snowy weather.

Krehbiel's life and achievements are extensive and well documented in the books, "Krehbiel: Life and Works of an American Artist" and "Albert Henry Krehbiel (1873-1945): American Impressionist, Muralist, and Art Educator". The following chronological outline has been developed from available family records, letters, and from the archives of The Art Institute of Chicago.

1873 Born in Denmark, Iowa, (the third son and one of seven children) to John Jacob and Anna Leisy Krehbiel.

1879 Moves with family to Newton, Kansas, where his father is a prominent Mennonite layman, prosperous carriage and buggy maker, and later a co-founder of Bethel College.

1895 Graduates from Bethel College, Newton, Kansas. Studies at the School of Design and Painting, Topeka, Kansas.

1896 William Merchant Richardson French discovers his talents while on a lecture tour in Newton, Kansas, and persuades him to pursue a career in art by enrolling at The Art Institute of Chicago. Rides his bicycle with older brother Fred from Newton to Chicago to take up studies at The Art Institute.

1902 Becomes an instructor at The Art Institute where he is awarded an American Traveling Scholarship by Art Institute.

1903 Arrives in Holland in July. Enrolls at Academie Julian in Paris, France, to study under Jean-Paul Laurens (neoclassicist and one of the last great history painters).

1903-1906 Between winter sessions at Academie Julian, he spends his summers in the museums in Holland and France and creates many figure charcoal sketches and paintings of the countries' citizens.

1905 Receives two more gold medals from Academie Julian (he had been awarded one in 1904 and one in 1905). Also awarded the coveted Prix de Rome.

1906 Receives the commission to design and paint mural for the wall of the Juvenile Court Room in Chicago.

1907 Unanimously awarded by a Jury of Awards the commission in a national competition to design and paint the murals for the Illinois Supreme and Appellate Court Rooms of the Illinois Supreme Court Building in Springfield. The designs depict the "Origin, Function, and Continuity of Law" using allegorical and mythological figures. Consisting of eleven wall and two ceiling murals, the work is completed in 1911. He continues teaching at The Art Institute, but in summers only thru completion of the murals. Mr. W. Carby Zimmerman, architect of the Supreme Court Building, considered the work to be "an example of the best mural painting ever executed in the West".

1913 Joins faculty of the Armour Institute of Chicago (later named the Illinois Institute of Technology) as instructor of architectural drawing. (He remains here also until 1945.)

1918 Art exhibit at McPherson, Kansas, along with George Bellows and Gustave Baumann.

1918-1919 Summers at an art colony in Santa Monica, California where he paints numerous coastal scenes and landscapes in watercolor on paper and some in oil on canvas.

1922 Receives the Martin B. Cahn Award for Best Painting at the Annual Exhibition of Chicago Artists. Has one-man show at The Art Institute of Chicago.

1922 Invited by The Museum of New Mexico in Santa Fe to participate in it's visiting artists program. The museum gives him the use of a studio space in the Palace of the Governors next to renowned Ashcan realist Robert Henri.

1923 Four of his Santa Fe works included in the Fiesta Exhibition of Paintings by Artists of New Mexico at the Museum of New Mexico in Santa Fe. Art Exhibit at the Pennsylvania Academy of Fine Arts (he also has showings here in 1928 and 1931).

1922-1923 Attends Visiting Artists Program at The Museum of New Mexico in Santa Fe.

1925 Included in the First Exhibition of the National Society of Mural Painters at the Buffalo Fine Arts Academy Albright Art Gallery in Buffalo, New York.

1945 Receives a request from The Art Institute that he remain on the faculty and continue teaching. He signs a contract to stay on for one more year.

1945 (May 18) Receives a letter from The Art Institute asking him to provide three representative samples of his work for a possible one-man exhibition in their Room of Chicago Art.

1945 (June 29) Dies of a heart attack in Evanston, Illinois, at the age of 72 on the day of his retirement from the Illinois Institute of Technology.

"A painter never seems to grow old. Nature has so many new things to reveal that one dislikes to miss a day."

Krehbiel amassed a vast and diverse collection of works throughout his life and travels. The media which he employed in his works include oil, watercolor, pastel and charcoal. They were created in Europe (Holland, France, Spain) and at home in the United States (Chicago and surrounding areas; New Mexico, California, and Saugatuck, Michigan). Though it is impossible to impart and display the full context of his works in this website, we have attempted to furnish a small representative sampling and hope that you find viewing the art as rewarding as we do providing it for you.

All artwork, illustrations, layout concepts, and material on this entire web site are owned and copyrighted © by the Krehbiel Corporation and are protected by U.S. and international copyright laws. Unauthorized use is prohibited, and images are protected with a digital watermark. However, please do not hesitate to contact us regarding permission to use images or for further information and assistance.